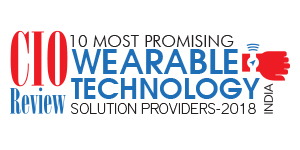 Interestingly, wearable technology dates back to 13th century when eyeglasses were invented. Little did the time slot knew that these wearable technologies will become one of the world’s best-selling consumer electronics product in the 21st century. Time rolled, and wearable technology saw its potential rise in every vertical that man knows now. From Bluetooth headset to google glass, Juniper report projects that wearable technology will dominate health, construction, pharma, hospitals, education, armaments, and several other sectors, making it roughly a 1.6 billion empire by 2020.

As the rise in wearable technology compounds, the autonomous wearables are on the verge to replace several lower technologies. Autonomous wearables, such as smart watches and Google Glass, refer to technology capable of running third-party applications. Typically, they have built-in connectivity features and advanced processing capabilities. In contrast, passive or basic wearables provide basic data about users. The demand for autonomous wearables, those that do not run third party apps, therefore, is on the rise. This transition from basic to smart autonomous wearables is gradually opening up a slew of opportunities for vendors, and app developers. Especially, India, due to its mass consumption and growing business environment, will soon witness an unprecedented demand for wearable technologies. The Indian diaspora displays a strong potential to incubate wearable technologies in several sectors, such as BIM for 3D models in construction industry, different sensors for wearable devices in manufacturing industry, military or security agencies and several others. The advent of providing different and realistic user experience has triggered industries to carefully provide suitable space for wearable technologies to grow. Well acquainted with this scenario, CIOReview India presents a list of “10 Most Promising Wearable Technology Solution Providers”. Being closely scrutinized by a distinguished panel of judges including CEOs, CIOs, CXO, analysts and CIOReview editorial board, we believe these solution vendors can help your organizations start a journey that began a long time back in the history of wearable technologies.

We present to you CIOTechOutlook 10 Most Promising Wearable Technology Solution Providers - 2018.

Our subscribers play a decisive role in finalization of our annual list of Top Wearable Technology Solution Providers by recommending those which have served them with excellence and are praiseworthy. If you feel there is a company that deserves to be on our annual list, do write to us about them mentioning their value proposition.

Your recommendation request for upcoming annual list of Top Wearable Technology Solution Providers has been Successfully Sent . We will be in touch with you shortly.